by MWP admin
My uncle have this tree in his garden which actually is a successful cutting from a larger one. It has dark green, leathery leaves as seen in the photos with a particular blade tip.

He said that it forms showers of small white flowers which develop to small berries. Flowers in May.

Faintly reminds me of Sambucus (nigra) , but this has serrated leaves and lighter colour. I assume it is a cultivated tree but not 100% sure.

RB
by IL-PINE
I believe it is Cannabis

by MWP admin
Sometimes the Admin is sleepy!

I think I have already identified the tree as Ficus nitida, though I am not 100% sure.

BTW - It was fiunny to read your comments!
by IL-PINE
yes, pretty much so
by RB
F. benjamina not nitida. Most commonly seen in variegated form but this type is also common.

Nitida (street planting ficus) has more rounded leaves and they are not droopy.

RB
by jackpot
F. benjamina not nitida. Most commonly seen in variegated form but this type is also common.

Nitida (street planting ficus) has more rounded leaves and they are not droopy.

No, RB- sorry but you are wrong

1. F. bejamina: The leaves are very shiny and pale green when young, dark glossy green and leathery when mature, with very glabrous surfaces. They are very dense arranged!
2. F. nitida is a wrong name and in fact it is Ficus microcarpa: Laurel Fig is often found in nurseries under different synonyms, and even similar patented cultivars like Ficus retusa “Green Gem” lead to confusion. Recently, the name Ficus thonningii was given to Ficus microcarpa as the newest name, but this does not seem to be acceptable. You are right: In Malta this popular ornamental tree is really beautiful and is used for landscaping and the comment made that this tree “is a place where spirits get together” really seems to be true...

As far as I can see from the pic I would prefer to say Ficus altissima (will the fruit aggregates come in red when ripening?). Are the undersides of the leaves rusty brownish? Then I would prefer to say Ficus rubiginosa. In fact, this pic could represent 10 other Ficus species grown in Malta- a very difficult genus which gaves me headache the last 2 years, but I desribed only 10 species

by RB
I have to leave it to you that you are correct, because I was not aware that the above was not benjamina, as I always mistakenly thought it was, due to its similarity and wide availability in garden centres together with benjamina.

Regds and welcome back to the forum!

Hope to meet you for one of our ornamental trips during the last week of February and first week in March. Herewith, I invite you to attend (but due to the 20 students the language will be in german- but at least you will understand the scientific names)

by RB
That would be interesting JP - please advise details later thanks!

RB
by MWP admin
RB: Ficus nitida and F. microcarpa are the same plant (synonyms). It is not 'wrong' but some knows it in one name and others in the other. Same as Palaeocyanus and Cheirolophus; Chiliadenus and Jasonia, Bituminaria and Psoralea . . . .

The lower side of leaves where a bit paler from the upper but not red. I am not sure if this specimen photographed is actually F. nitida (or F. microcarpa) because my uncle intends a bit on trees and so he would reckognize it (I think!) On the other hand, I checked the leaves of the trees at Floriana / Valletta and where identical. So I do not know if the fruit is different and makes the tree to be different from F. nitida?
by RB
Must be misunderstood. Never went into the discussion as to the correct /latest name of nitida but agree with JP that it is not, whatever it may be called, and is not the "street planting" tree.

The street planting tree (nitida/whatever) has leaves that are more rounded and a more robust growth habit, generally closer spaced leaves, etc, not the benjamina-like spindly growth that the tree in your pic shows, which JP calls possibly altissima.

Sorry if was not clear before.

RB
by MWP admin
OK RB, but now it is me the one who is confused / misunderstanding!

Did JP said that the leaves looks like F. microcarpa (F. nitida) or I got him wrong?

I saw these type of leaves on trees at Floriana to Valletta and I think that most street trees are the F. microcarpa (F. nitida). The leaves of Floriana had the same semi-glossy dark surface, and a cuspidate tip.

So on the "second count" of reading the posts are you/JP saying it is NOT F. microcarpa (F. nitida) but perhaps F. altissima.

In that case I am pretty sure that the latter is planted in streets at Floriana, from the leaf morphology.

An aside, I seem to have the impression that what you have there does not like too much direct sunlight in Summer, I have a benjamina planted out in the open, sun from dawn to dusk, and in summer the leaves all go very yellow.

Nitida/whatever can germinate from seed but it's highly uncommon that it gets a chance, it is rather slow growing as a seedling so gets overcome by "weeds"

. It is sometimes seeded around Valletta, you may find it growing in cracks in the walls and the like, there is one (small) one actually growing on the steps that lead from Victoria Gate, you need to look carefully.

RB
by MWP admin
From the internet: 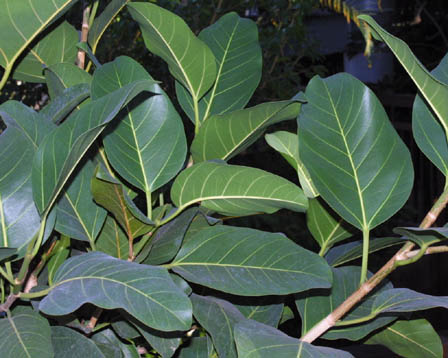 And finally a set of ficuses

by D. Cilia
Ficus alii looks interesting, never saw an actual 'live' one. But I'd have to say my favourite species is carica

by RB
Would you not say that the Internet pics of benjamina fit exactly with your pics - altissima it is not. Maybe JP can reconsider??

RB
by MWP admin
We have a benjamina at home and the leaves have that typical cuspidate leaves, but does a benjamina grow as high as a 10m tree? Also one must bear in mind that the internet is not a 100% reliable source, though many photos of F. altissima do not look like the ficus in my photo but I reckon that benjamina does.

RB, if you are by Valletta/Floriana, check a large tree that is situated somewhere between Chemimart (Floriana) and the street that leads to SPCA and there you should find a huge tree (like F. microcarpa/nitida) with the benjamina-like leaves, but maybe less cuspidate.
by RB
Don't know from first hand experience how large a benjamina grows. I have seen 10, 15ft exemplars but this of course does not mean it can not grow bigger. The one in the garden is appx 10ft and is slowly growing larger, slowly because the sun and the wind do it no favours and rather than the "open" growth seen indoors or in sheltered areas, this is rather denser.

Will look out for the tree you mention, there are plenty "nitida" there on the main road, is it with these?

RB
by jackpot
MWP admin wrote
RB: Ficus nitida and F. microcarpa are the same plant (synonyms). It is not 'wrong' but some knows it in one name and others in the other. Same as Palaeocyanus and Cheirolophus; Chiliadenus and Jasonia, Bituminaria and Psoralea . . . .

No, MWP, exactly this is the problem:
F. nitida is in fact a wrong name because it is not a true synonym but was misapplied for both (F. benjamina and F. microcarpa) F. retusa L. “Nitida” would be a correct one for F. microcarpa...

(Let us forget the taxonomic details which are not so important)
As I said: Ficus is difficult and I did not say it is F. altissima- could be F. australis or another one. You need many details for an exact determination.
Fact seems to be that your pic is NOT microcarpa and NOT benjamina. Anyway: leaves vary and are not as important as the fruiting aggregates.
by MWP admin
I see, the internet gives lots of 'uncertain' stuff and one may get worng ideas. It is mentioned in a couple of sites that nitida=microcarpa=retusa =x =y =z) I gave a closer look to our F. benjamina at home and I must say it is not exactly the same, the tip is relatively longer. I take JP advice and stope scratching my head and hours browsing on the internet - I wait for the fruit and post again (unless the book is already available and gives a clear ID)

Period
by jackpot
no, it will not (the book)- not in Ficus!

jackpot wrote:MWP admin wrote
As I said: Ficus is difficult and I did not say it is F. altissima- could be F. australis or another one.

101% not australis, australis has larger leaves which are relatively wider. Don't ask, obviously I have 3 of

- from a seedling (last year), through one in a large pot, to one which is already a medium size tree about 3m high by about 4m wide.

RB
by RB
...australis to all intents and purposes is just like a scaled-down elastica, except that it can grow just as large as a tree if not larger.

by MWP admin
Another Ficus in a pot at Ta' Xbiex.

The leaves were in the range of 5-10cm long. I always ignored Ficuses until this post!
by RB
THAT is australis

Listen guys, today I was at Valley road, Msida, and there are those large trees (15m high or so) which RB calls them "Street Ficuses" and so logically Ficus microcarpa. Now I am near to 100% sure that the leaves are identical to my first post, that is slightly cuspidate but not as much as benjamina.

Is there two 'vars' of F. microcarpa one with acute apex and one with leaves like my pics? Remember that the one at Floriana was also the same type of leaves.
All times are UTC+01:00
Page 1 of 2
Powered by phpBB® Forum Software © phpBB Limited
https://www.phpbb.com/